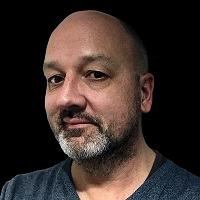 David Conyers is a science fiction author and editor living in Adelaide, South Australia. He completed a degree in engineering from the University of Melbourne, and today works as a tender writer in the construction industry.

David has published over fifty science fiction and horror short stories, won several awards for his writing, and edited five anthologies including one of the first fiction collections to explore the concepts of exoplanets, Extreme Planets. For over a decade he was the Arts and General Editor and reviewer for Albedo One magazine where he interviewed many top science fiction writers including Iain M. Banks, Greg Egan and Will McIntosh.

His extensive portfolio of Cthulhu Mythos fiction includes his popular Harrison Peel espionage versus the Elder Gods series, and for more than a decade he was a prolific contributor to the Call of Cthulhu tabletop role-playing game.